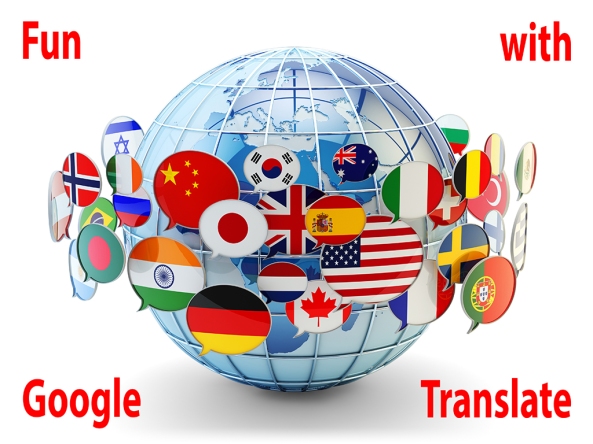 Google Translate is actually pretty handy as an informal tool.

There have been times where I have wanted to have at least a partial understanding of something that I read in another language online, and Google Translate has helped me with that.

I’m also a little rusty with French, and Google Translate has helped to fill in some of my gaps.

But if you wrote something and wanted to have a professional translation of your writing into another language, well, as you will see in this article, that could result in some interesting consequences.

What I will do is type a variety of expressions in English.

I will copy and paste these expressions into Google Translate, and have them translated into a different language.

Then I will have them translated back into English.

(Isn’t this what everybody does when they feel like having some fun?)

LET’S START WITH SOMETHING EASY

We will start with a simple opinion in English. (As a person’s opinion, it is informal, not proper grammar.)

I strongly prefer slacks over blue jeans on the golf course.

I copied and pasted the above text into Google Translate.

I had the text translated from English to Chinese (traditional).

I really like the blue jeans on the golf course.

Unfortunately, that’s pretty much the opposite of the original statement.

Let’s see if we can find some good sentences to translate.

Meet Chloe, a blond bombshell dressed to the nines.

Meet Chloe, a blonde bomb dressed in lint and dust.

(Hey, maybe the novel would be better this way…)

Input. (The awful, Vogon variety.) I put all of this into a single line of text (with spaces in place of the line breaks).

How did I get into this bad romance

He is so handsome but too psycho

How much I wish I could turn back time

And not ride on his motorcycle

How did I come to this bad romance

is so beautiful, but very handsome

that I want to change my time

on my motorcycle and not

(It started out so well, too.)

You could imagine that song lyrics are even better.

SIMPLE SHOULD BE BETTER, RIGHT?

It’s interesting what a difference the middleman makes. When I tried using Japanese, it came out almost perfectly.

I SAVED THE BEST FOR LAST

I bought a bicycle for my daughter on Amazon last year.

It was difficult to find the right color in the right price range.

When I finally did, there were several 5-star reviews with names that seemed indicative of a certain language (I won’t say which).

But there were a few 1-star reviews claiming that the instructions were virtually impossible to read.

Well, I have a Ph.D. in physics, so I figured I could assemble a bicycle myself.

My family had a blast reading the instruction manual. I’ve never read anything so funny!

It’s like someone typed the instructions in another language (still not saying!) and used Google Translate to turn them into English.

In fact, it wouldn’t surprise me at all if that’s what actually happened.

Let me share a few goodies from these instructions. I took care to copy all of the typos correctly, including the punctuation issues.

Imagine if reading were a big-time spectator sport like boxing or football:

Educators have permission to freely copy part or all of this list entitled “If Reading Were a Spectator Sport…” for non-commercial purposes in order to help promote the spirit of reading.

I have a little puzzle for you. Don’t worry, it’s easy. You can figure it out. 🙂

See if you can figure out what the following puzzle says. It’s in English! Really, it is! Following the puzzle is a hint. If you need help, read the hint (but not the answer). When you want to check that you’ve solved the puzzle correctly, then you can check the answer.

If you didn’t mean to read this far yet, you better lift your eyes in a hurry!

Ready or not, here comes the hint: Try reading it aloud and you might recognize some of the words. Maybe it wouldn’t be a bad idea to consider the title of this post, too. 🙂

For example, the word ‘idea’ becomes ‘odie.’ Note that one sentence from the puzzle has a phrase that reads, “where the letter ‘u’ precedes the letter ‘a,’” in which the ‘u’ changed to ‘a’ and the ‘a’ changed to ‘e.’

If you had to read the solution to figure out how to solve the puzzle, it isn’t too late to see if you can now translate the puzzle text.

Following is the translation of the puzzle text using the technique described in the solution. Don’t read the following text unless you are ready to check your answer.

I can not imagine why you might not be able to understand this!

All you have to do is replace each vowel with the vowel that precedes it, where the letter ‘u’ precedes the letter ‘a’ (well, not quite, but that is the general idea).

Have you got it figured out yet?

This is your last chance.

Description: 60 minutes, 3600 seconds, 1/24 day, looks a little shorter while having fun and a little longer when bored