Kindle Unlimited allows customers to download multiple books, whereas Amazon Prime used to allow only one borrow per customer.

So there was much concern that Kindle Unlimited may pay much less than the usual $2 per borrow.

Well, the results are in, and Kindle Unlimited paid $1.805 per download/borrow.

Although July was a partial month, it also received a big boost of activity as the program was new and many customers were trying it out and using their free trial periods.

I had been predicting significantly less, yet I’m very happy to have been wrong. 🙂

Copyright © 2014 Chris McMullen, Author of A Detailed Guide to Self-Publishing with Amazon and Other Online Booksellers 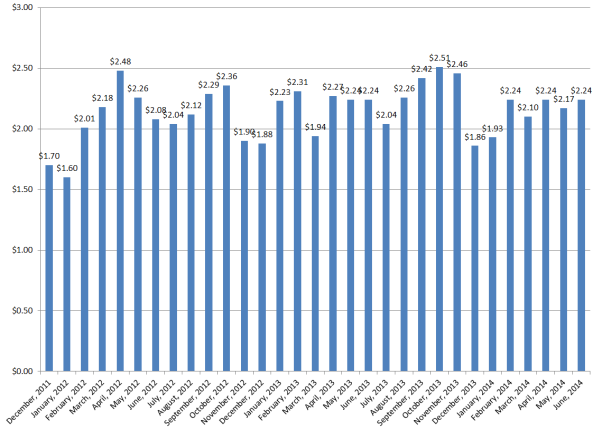 How Much Do KDP Select Borrows Pay?

With the introduction of Kindle Unlimited (read more about Kindle Unlimited by clicking here), many authors are wondering how much Amazon will pay for each qualifying download (i.e. where the customer passes the 10% mark).

Although that’s a complicated question (since customers can download several books through Kindle Unlimited, whereas Amazon Prime customers were only able to read one free KDP Select book per month), we do have data for KDP Select going back to the launch of the program in December 2011.

You can see this displayed graphically above. Below, you will find the data in a table.

Copyright © 2014 Chris McMullen, Author of A Detailed Guide to Self-Publishing with Amazon and Other Online Booksellers